The Western Auto Building was built as the regional headquarters for Coca-Cola in 1912, but was soon sold to an unknown buyer in 1922. The building was not officially occupied at this time, nor would be until after it entered foreclosure in 1929 and was purchased by the original owners, the Candler family, who began renting a few floors to the Western Auto Company in 1932. This decade-long "dark" period occurred at the height of prohibition (1920-33) in Kansas City, a city essentially owned and run by the Civella Crime Family. There were rumors that the Western Auto Building had became their de facto city hall, but the police were unable to find any evidence of occupancy during the many raids, both legal and otherwise, that they orchestrated throughout that time. On several occasions, the entire police force was ordered to the building in response to reports of lights being turned on and off in individual rooms, occasionally even entire floors. To the department's increasing frustration, these full-team operations often overlapped with significant periods of criminal activity elsewhere in the region; a coincidence that did not escape the chief of police, but that was unfortunately unavoidable due to the paramount necessity that the mob be disbanded as quickly as possible. The Civella Family had been highly effective in creating an "Open City" during prohibition: the police had not been able to make any alcohol-related arrests since the Family had infiltrated, and Kansas City was rapidly developing a reputation as “friendly” territory. This trend was impossible to reverse, and organized crime continued to flourish, making Kansas City the most Open City in America during that time.
It was only after John Lazia, who controlled the Civella Family's rackets, was killed in 1934, that law enforcement could even begin to unravel the mystery of who had been using the Western Auto Building, and for what purpose. Many of their questions were never answered, as the Family remained very powerful and well-connected, culminating in the election of one of their more prominent "made men", Forrest Smith, as governor in 1948. As recently as 2010, the FBI was still chasing the Civella Crime Family, indicting four members for allegedly operating a multi-million-dollar internet gambling scheme. The use of the Western Auto Building as their headquarters during prohibition has never been formally proven, but several interesting clues have led investigators to a relatively confident conclusion.
One of the most important discoveries was a seemingly abandoned electrical box on the back of a building located directly opposite the Western Auto Building, on the other side of Grand Boulevard. This box did not service the building on which it hung, but had drawn power from the grid intermittently between 1922-32, an anomaly that was noted only after an investigator gained access to records that had been previously closed by the governor’s office. Furthermore, all the wires had been cut by the Kansas Power and Light Company in the late 1930s. The second piece of the puzzle was discovered in 2016, during a minor renovation of one of the sub-basement floors in the Western Auto Building: a portion of the south-west corner of the foundation was judged unsound to the foreman, and it was decided that the existing concrete should be removed and replaced. An approximately 3' x 7' area of the wall crumbled almost immediately, leading to an underground tunnel connecting several rooms between the two buildings. It appeared as though these rooms had housed large groups of people for extended periods of time, as a wide range of items were still strewn about: the evidence collected included light bulbs, telephones, radios, cooking implements, rudimentary water supply and sewer facilities, and mattresses. Most important however, was the discovery of electrical wires along the entire length of the tunnel, running from an interior fuse box located 20' underground directly below the exterior box, all the way to the tunnel's entrance in the Western Auto Building. Tracing abandoned and previously demolished electrical chases from that point into the rest of the building exposed a vast and meticulously organized network that carried power to every room on every floor. The mob had clearly been manipulating the lights from their underground bunker, in order to draw attention and law enforcement personnel from the real jobs happening elsewhere.
The State Historical Society of Missouri-Kansas City recently received a grant to revisit this significant piece of Kansas City history. The first phase is an interactive project that offers participants a means of controlling the famous Western Auto sign from that very box, using similar, but updated technology. 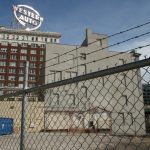 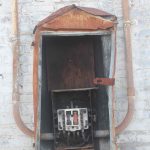 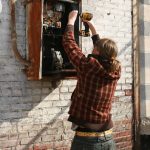 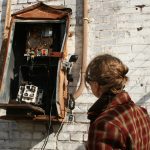 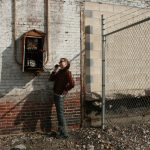 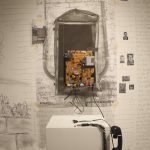 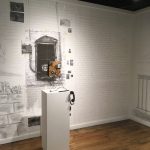