A recent USGS (United States Geological Survey) study has concluded that the wastewater disposal incurred by increasing oil and gas production in the central United States has led to an extraordinary jump in the frequency of earthquakes in these states. To demonstrate this "dramatic increase in seismicity", the USGS published some surprising statistics: from 1973 to 2008, there were an average of 24 earthquakes of magnitude three or larger per year. By 2014, this figure had ballooned to 688. In Wichita alone, there had been, on average, one earthquake per year until 2014, when more than 125 earthquakes with a magnitude of 2.5 or larger were registered. This unanticipated frequency has accelerated damage to buildings and infrastructure that had not been designed for this type of compounded stress, and features that were badly or improperly constructed suffered disproportionately. The welds on the bottom corner of this guardrail had not been of high quality when completed in 1989, but this oversight was not a concern until perpetual shaking finally degraded the connection to a point where the steel became vulnerable to water infiltration and hence, rust. Over time, the joint disintegrated completely and left an open span that severely compromised the guardrail's public safety function. The guardrail will eventually be replaced, but the City of Wichita decided to wait until the regional earthquake frequency decreased to pre-2014 levels, to avoid the situation repeating itself. In the meantime, the interim solution is an adjustable device that can be re-calibrated month-to-month, depending on seismic activity, in order to maintain consistent structural integrity in that connection. 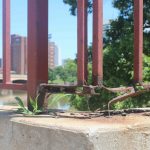 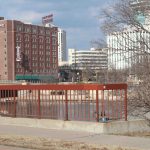 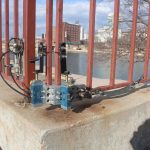 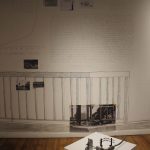 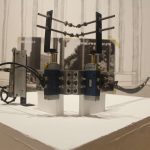