Three years ago, Fisch Haus organized a seed-bombing project in the Commerce Street Art District, with the goal of creating green spaces where only weeds and garbage had existed before. The festival was split onto two phases: the first task was to make the seed bombs during a public event held at Botanica. Seeds and fertile dirt were donated by Johnson's Garden Center, and children were invited to make their own to take home, and/or for Commerce St., and then come downtown the next day to “bomb” the street. Stan Herd, a world-renown landscape artist from Kansas, traveled to Wichita to talk about his media--plants and earth--and how these types of aesthetic interventions can also serve as an ecologically advantageous addition to the urban environment. Stan helped us bomb, but also took the initiative to create two small plots in a disused area, contained by broken bricks and parking barriers, where we could possibly sustain some more permanent plantings. To kick this endeavor off, he planted a gorgeous white rosebush in one of the beds.
The rosebush demanded a great deal of care initially, specifically water. The water in Fisch Haus is softened with salt, so tap water cannot be used to water plants. There's only one faucet in the building that still has un-softened water running to it: located at the very back, in the shop, it's as far away from the rosebush in the front alleyway as is possible. This distance, combined with the fact that the rosebush required a lot of water, made watering it very inconvenient. I persevered for a while, cursing the “goddamn rosebush” every single trip I made, but because I leave every summer for several months, the rosebush only received a minimum of care throughout the hot and dry conditions for the next four months. When I returned in the fall, that goddamn rosebush appeared to have dried up and died, which wasn't a huge surprise, but admittedly a bit of a disappointment. I forgot about it, and chalked it up to experience: growing plants in Kansas, especially over the summer, is not a good fit for me. However, the following spring, several small green leaves seemed to have sprouted from the base of the otherwise desiccated trunk of the bush. I watered it a bit, and discovered that it was, in fact, alive! In characteristic Elizabethan fashion, I continued to neglect it, but in characteristic nature-always-triumphs-over-humans fashion, that goddamn rosebush continued to grow. No one watered it that next summer either, and it looked completely dead again, but in spring of 2017, it sprouted more new leaves.
The bush hasn't gotten any bigger, nor provided any roses, but I wonder if it could, if actually cared for properly. This device is designed to provide resources for interested members of the community to tend the goddamn rosebush throughout the summer. I've provided water storage (hopefully refilled periodically by people in the neighborhood) and a seed library, in case anyone wishes to add new plants to the project or take some to plant elsewhere. There are also above-ground receptacles, as I suspect the soil below is far too polluted to grow food. 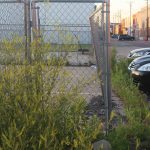 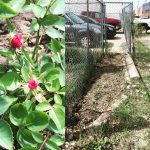 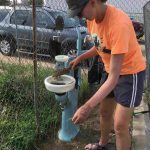 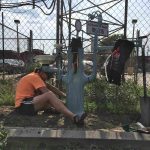 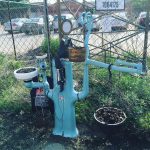 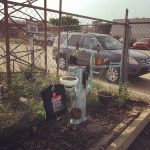 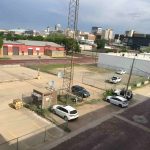 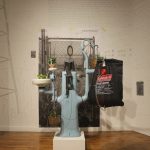 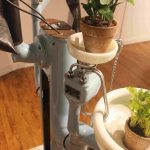 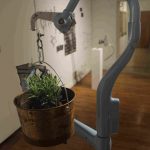 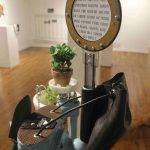