The building to which this broken handrail belongs appears to have been, up until relatively recently, pretty much abandoned; but, like many beautiful buildings in downtown Kansas City, it's being renovated and used as an event space in the meantime, according to the posters in the windows that are advertising the ballroom for wedding receptions. The building owners are having trouble drawing customers though, perhaps due to the perceived degraded nature of the neighborhood, so a luthier friend of theirs offered to help. The walk up 9th St. to the entrance of the building can be particularly daunting to those unused to city living and thus hesitant to enter environments outside of their comfort zone, so the luthier proposed a two-part solution: the ambience would undoubtedly be improved by fixing up the adjacent handrail, but what if potential wedding reception clients could also be subliminally primed to notice the content of the posters, and perhaps even call the number? A motion detector will trigger a recording of Mendelssohn's wedding march as people walk by, ostensibly performed by the electrified violin serving as a temporary replacement baluster. 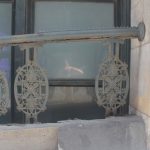 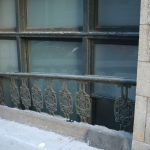 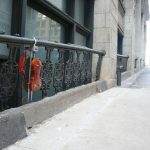 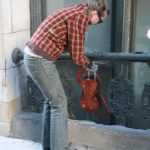 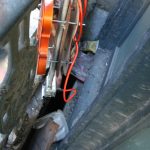 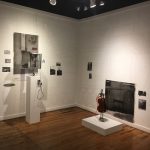 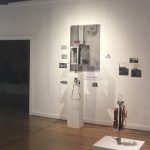